I’m back! I’ve been gone from this blog for a while, but rest assured I’m alive and still fascinated by prehistory. Today we’re coming back to a Halloween theme, however tenuous it may be.  One of the most notorious places in the world of fiction, the most infamous places in Europe, the home of the vampires and witches and werewolves, is Transylvania.  Transylvania is now part of Romania, north of Wallachia, west of Moldavia, and southeast of Hungary. It was a battle zone in the past, as Austrians, Russians, Hungarians, Turks, Wallachians, Moldavians, Poles, and Germans have struggled over the region.  Rich in minerals, it is a mountainous region,  consisting of mostly forest-covered hills and mountains topped with castles.  It was here that the notorious Prince Vlad Dracula imposed his rule with an iron fist and defied the might of the Ottoman empire. 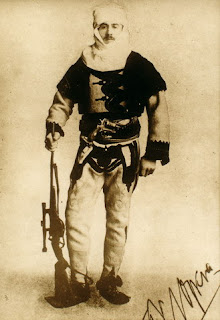 It is also a place rich for paleontology. This began with Baron Nopsca in a period from 1899 to the First World War. Baron Franz Nopcsa von Felső-Szilvás, born of a Romanian line of Hungarized aristocrats in the Austrian empire, left the University of Vienna with two goals: The throne of an independent Albania, and the discovery of Romanian fossils. This colorful, Romantic figure tragically lost his fortune on his pursuits and ended his life in a suicide pact with his Albian secretary and lover Bayazid Doda in 1933.  However, in his lifetime, he found a treasure trove of Romanian dinosaurs from the end of the Mesozoic. 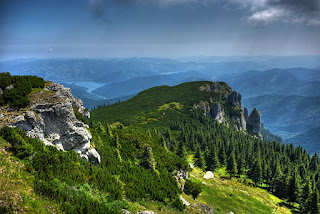 In the southern hills of Transylvania, the young Baron discovered new, strangely small versions of known species. Some were familiar-the small ornithopod Mochlodon, the larger basal ornithopod Rhabdodon, and the tiny nodosaur Struthiosaurus were already known from Europe, and he assigned some large theropod material to Megalosaurus. However, these were joined by new species-the small hadrosaur Telmatosaurus, the tiny fragmentary theropods Heptasteornis and Elopteryx, the bus-sized sauropod Magyarosaurus, and the small terrestrial crocodile Allodaposuchus. They seemed small and primitive compared to their counterparts recently discovered in North America. Nopsca found the answer quickly using his expertise in biology and geology; the surrounding sediment was predominantly marine, indicating that the European subcontinent was a series of islands in the Cretaceous period. After all, didn’t the Dutch discover a giant marine lizard and the English various bizarre marine reptiles in the 18th  century? 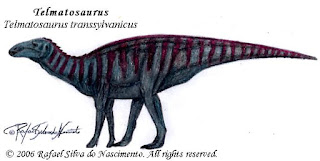 Another thing he took into account were recent British naturalists, who had surveyed the animals of their empire, and found that animals like big cats, deer, rhinos, bovids, and even elephants tended to be much smaller in the islands of Southeast Asia.  Logic explained the rest-islands, by their nature, have limited resources of land and food for land animals. These resources are a driving force in evolution; the larger an animal was, the lower the population it could have, and this correlated to the size of the land. Thus, natural selection promoted the smaller species in smaller spaces, as they needed fewer resources. So buffalo could grow the size of deer, leopards the size of dogs, and elephants the size of cattle.  This would apply to dinosaurs as well, Nopsca concluded.  Magyarsaurus was a tiny sauropod because it had less food to eat.

However, with the world wars inflicting their carnage on the world, and ending with the tight grip of the Soviet rule on Romania, Eastern Europe was closed off. Soviet paleontology was limited-to avoid the prying eyes of politics, Russian scientists had to ply their trade in Siberia and Mongolia.
In 1975, two English ornithologists, Colin Harrison and Alexander Walker, took advantage of the slowly dying USSR and looked for the smaller birdlike bones that Nopsca had found. They discovered more specimens, and came to the conclusion they belonged to an early family of giant, stilt-legged owls similar to the Pleistocene Ornimegalonyx from Cuba. Later studies revealed these to be Alvarezsaurs, a bizarre form of theropod from the Cretaceous.

The revolution finally came in the 2000s. Eric Buffetaut of Le Centre National De La Recherche Scientifique (The French government’s scientific division) joined forces with the University of Bucharest’s Dan Grigorescu and Zoltan Csiki-Sava to discover a new giant pterosaur, Hatzegopteryx. Hatzegopteryx proved to be a close relative of North America’s Quetzalcoatlus, but also revealed a new nature for the mysterious flying giant. 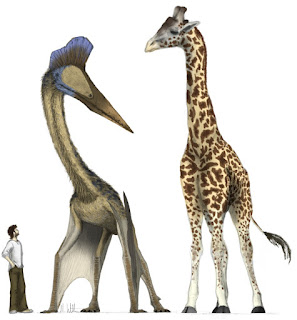 Hatzegopteryx (named after the town of Hațeg near where it was found)  was an Azdarchid, one of the last and the largest Pterosaurs. With a wingspan of over 35 feet, it was the largest flying animal in the region. With a head larger than a human being’s entire body, it was the top predator of the region. Pterosaur experts reconstruct the animal like a giant stork, flying from island to island, striding down the game paths and spearing dinosaurs with its great beak.

Another great discovery came in 2009, when Mátyás Vremir of the Transylvanian Museum Society’s Natural Science department (named after Nopsca, naturally), came to Zoltan Csiki-Sava with strange remains. They discovered a strange kind of birdlike animal with large curved talons on its hands and feet.  This bizarre, stocky animal’s head has not been found, leading paleontologists to argue whether it was a carnivorous dromeosaur, herbivorous bird, or neither.  The animal is called Balaur bondoc, the genus referring to the serpentine Romanian dragon, archenemy of the folk hero Făt-Frumos. Whatever it is, it’s unique, it’s strange, and it’s a theropod full of mystery.

I for one can’t wait for new discoveries from the land of Dracula. Hațeg island is a strange and fascinating place in prehistory, and no doubt it has many more secrets just waiting to surface.
I recommend this book on the current state of research in Romanian dinosaurs: http://www.amazon.com/Transylvanian-Dinosaurs-David-B-Weishampel/dp/1421400278

Email ThisBlogThis!Share to TwitterShare to FacebookShare to Pinterest
Labels: Cretaceous, Dinosaurs, holiday, sauropods, too many genera to tag